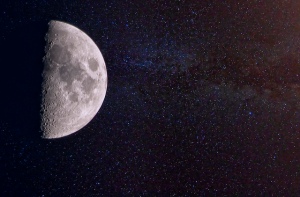 As we start this Easter week I post the poem below, in which I do my best to sum up some of my feelings about what happened during that week so long ago. The central act of eternity began on the Thursday night, and so the poem concentrates on that evening.

As I ponder the events of that evening, I imagine the night being very still, with stars shining – the universe itself almost holding its breath, witnessing the events that would unfold.  And today they remain as silent witnesses themselves of the greatest act in history.

It is marvellous to me that He would willingly suffer such horror, so that we might have peace, but such is the love He offers us….

The stillness of night,

Such peace it gives;

The comfort of guardian stars.

The sun, though not seen

Is not gone, but lives;

As the glow of the moon testifies.

And we wander o’er sands

The warmth in our hearts,

Give assurance of Gilead’s balm.

For we know that our paths

May not ever be smooth.

But our griefs will not last

Because of this truth:

One suffered for you and for me.

Nearly two thousand years in the past,

A stillness again in the air;

No peace could impart

For the One who bore our despair.

Though He was God’s Son

Owed nothing but kindness and love;

Though his life was a sermon

Of perfection on view,

Of serving His Father above;

In unending torrents of hate.

The pain that He felt

Was great – but it grew

Would mark His flesh that night

With the pains of all women and men.

Our sins were the cause

Of that awful sight;

Of blood seeping through pores of His skin.

The stars, and the moon,

And trees too, had sight

As a drop slowly fell to the ground.

Broke the stillness of night:

The sum of our cries was His sound.

Were there in the trees –

As witness to what there took place.

They saw our Dear Lord

Saw Him fall to His face.

As drop after drop

Of His precious blood

Stained the ground beneath His feet,

As best they could,

Till His suffering was complete.

His hurt we cannot

The suffering Of He

Who took our blame;

To the depths he was willing to descend.

The pain He bore

The victory was won.

He paid the debt

To justice and law,

But not just law

All pains He sought to mend.

No matter the cause

His mercy will extend.

Why would one perfect

As to suffer so willingly?

His love for you and for me.

Of what He that night endured.

And if we approach Him

His promises will be sure.

And stars and moon

Rejoice in His redeeming name.

His majesty to proclaim.

And when I now walk

When the sun has hidden its light,

The glow of the moon

And the stars in heaven

And look down on His daughters and sons;

His act of supernal love;

They remind me: the battle is won.

How grateful I am

For the gift of peace,

That comes because of His grace,

That one day all tears will cease

And we enter His embrace.