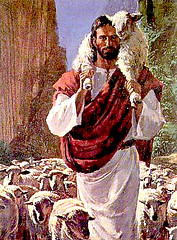 The following are the lyrics to a song by Steven Kapp Perry.  The imagery throughout  highlights several of Christ’s roles.  The key to its meaning for all of us is that, like the sheep in the words of the song, you and I also realise that we too “are the reason for the scars upon his hands.”

Once the Lamb of God

See the sheep upon the meadow,
quiet and serene.
Peaceful as if painted
on a field of emerald green.

And the winds they blow,
but they bring no fear
for the sheep well know
that the shepherd is near.

Some among his flock have wandered,
some were lost for years.
Still the shepherd found them
for he tracked them by their tears.

And they mourned for their good shepherd,
but their sorrow soon would pass
for at dawn they saw the shepherd
walking through the dewy grass.
And they gathered ’round their shepherd
and every head did nod
for they knew that this good shepherd
was once the lamb of God.

Beyond their comprehension
is the love within his gaze-
this Shepherd of the stars
who made the grass on which they graze.
His willing condescension
to live the life they knew
and save them by his blood,
is what no other lamb could do.

See the shepherd on the meadow
watching o’er his flock,
trusting in the shepherd
who was once the lamb of God.