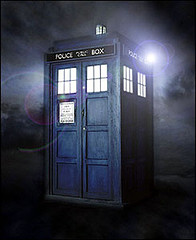 Some of my colleagues at work and I were discussing the other day what superpower we would like if we had the option to choose one.  I don’t know how the conversation started, but it was the end of the day, and I think we all were going home with a lot of work outstanding, and a popular choice was therefore to be able to go back in time and be able to have another few hours in the day.

The ability to manipulate, or travel through, time, is a popular one in science fiction.  Whether it be The Time Machine, A Christmas Carol, Star Trek, Hermione’s “Time-Turner” in Harry Potter, or the ultimate Time Traveller “The Doctor” in Doctor Who, the ability to alter time in some way seems to be something many of us find some level of fascination in.

I must admit, when I stop and really try to understand time I end up giving myself a headache – I don’t think my mortal brain has the capacity to understand just how frankly weird it is once you start looking at how it operates throughout the universe.

And this difficulty to understand time extends to the Atonement and its timelessness.  While I find it relatively straight-forward to think of someone doing something 2,000 years ago that has an impact on me today (after all, I live in the UK where the impact of the Romans of 2,000 years ago remains substantial), it is a more challenging concept for me as a creature living within a sphere where time is so important, to understand how those who lived thousands of years before the Saviour performed His atoning sacrifice could have all of the same blessings from the same act – for them a future act.  Of course, nuclear physicists understand (at least intellectually) that time isn’t the constant that we feel it to be.  All sorts of strange things happen with time when you change speed, move into different gravitational fields, etc.  The “dimension” of time isn’t really anything like the linear constant it feels to us.

The prophets have taught this many thousands of years before such things as nuclear physicists existed, of course.  Abraham taught about different spheres of time (see Abr 3:3-5), and the prophet Alma explains to his son Corianton that, “…all is as one day with God, and time only is measured unto man.”  (Alma 40:8).  I’m sure that post-resurrection I’ll understand about time much better, and that suffices for me now.

What I find very interesting though, and something worth further thought and study, is that the Atonement was effective, not just back to the time of Adam, but prior to the creation of this earth.  Abraham tells us that when our Heavenly Father asked the question, “Whom shall I send?”, that there were two who volunteered their services.  In the Abraham account of this, we learn simply that there were two, that the Father says, “I will send the first.”, and that the second, “was angry, and kept not his first estate.” (Abr 3:27-28).

In the Moses account, we learn that the first was the Father’s “Beloved Son…Beloved and Chosen from the beginning….”, and that the second was Satan.  (Moses 4:1-3)  But what we also learn is that when the Father cast out Satan and his hosts following their rebellion, it was by the power of the Atonement.  I have been taught since childhood about our LDS belief in our pre-mortal lives, and Satan and the “third part” of Father’s children being cast our of heaven; but I had never considered anything other than the Father using His own power to do so.  That is not what the scriptures tell us though.  The scriptures say, “…by the power of mine Only Begotten, I caused that he should be cast down….”  (Moses 3:3).  The book of Revelation confirms that the power of the Only Begotten referred to here wasn’t simply a power that had been developed premortally due to the Saviour’s superior obedience to the Father and His premortal progression, but was specifically in relation to the Atonement, for there we read that in what we call the war in heaven, “they overcame him by the blood of the Lamb….” (Rev 12:11)

Firstly, I find it interesting that even at the point of what we LDS call the “Council in Heaven”, once Jehovah was chosen as the Saviour, the power of the Atonement became effective.  Was there something in the Father’s selection of Jehovah which “activated” if you like the Saviour’s atoning power?  Of course, I don’t know the answer to that question.  But the lesson I learn from this is that if the blessings of the Atonement could reach back through time to that point, then surely its ability to reach through time to me is pretty straightforward!

Secondly, I have asked myself why would the Father use the power of His Son to cast out Lucifer, rather than His own power?  Surely the power of the Father was superior.  Surely also Lucifer would have known that he would have stood no chance fighting against the power of his Father – and perhaps he wouldn’t have fought quite so hard?  While I suspect we will learn and/or remember much more about this after our mortal lives, and will understand then much more fully, I think that at least in part, the power of Christ’s Atonement was used to cast Satan out of our midst because our Heavenly Father wished to demonstrate to all of His children the power that was in the Atonement.  We would see first-hand its power to defeat Satan and his hosts – and would recognise therefore that it would be more than sufficient for our mortal probation.  We had chosen to follow the Father, and here He was giving us an affirmation that our choice had been correct.

To Lucifer and those that followed him, perhaps they felt that together they would be able to combat the power of the Atonement in the lives of mortal men and women.  Lucifer seems to have been bursting with confidence when he made his proposal to redeem mankind, and perhaps he thought he could match Jehovah’s power as the Father’s plan was carried out.  However, the Father determined that He would use that very power of Jehovah against Lucifer to cast him out as a demonstration to him and to his followers that the war was already lost for them – he and his followers would be no match for the power of the Atonement.  While he and his followers may succeed in convincing some to lose their exaltation, the power of the Atonement would ultimately save all those who kept their first estate (with the exception of a very small handful) into a degree of glory.

Similarly, while the majority of the Father’s children accepted His plan, I’m sure there were many who had some concerns about what their future mortal sojourns would hold.  I would guess Lucifer really talked up how many of the Father’s children would be lost under His plan, in order to gain as many followers as possible, and while those who remained true to the Father would be blessed for their exercise of faith, I think also that the Father would have wanted to reassure his faithful children.  What better way than to demonstrate that even before the earth’s creation began, the Atonement was fully active and was more powerful than the hosts who would oppose them during their testing period.  What better way to show His children that there was sufficient power in the Atonement to keep Satan from us in mortality than to use that very power to cast him and his hosts out of heaven before our very eyes.  I am sure that as we witnessed the power of the Atonement in this way, we had a renewed and strengthened faith – even a perfect knowledge – that the Atonement had all of the power that we would need during mortality to help us safely through.  John reports that we cried out, “Now is come salvation, and strength, and the kingdom of our God, and the power of his Christ: for the accuser of our brethren is cast down….” (Rev 12:10)

So, as I go through my mortal life with my struggles, and my doubts and uncertainties, I ponder that there was a time, before the foundations of the earth, that I knew beyond any doubt that the Atonement was sufficient for me, because I witnessed it first-hand.  The Atonement always has power to cast out Satan. There is no circumstance in which Satan can win if I rely upon the Saviour – absolutely none.  And that is why, I believe, the Lord gives us this account in the scriptures – so that we can know that His power is more than sufficient.  We truly can rely on Him in all circumstances, and He will save.